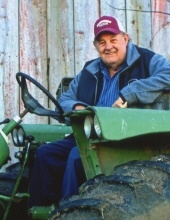 Robert "Bob" Hartzler of Garden City, Missouri was born May 20, 1944 in Harrisonville, Missouri and he joined the family of Rolla and Lela Hartzler. He departed this life Friday, October 19, 2018 at St. Luke's East in Lee's Summit, Missouri.

He grew up on a farm outside of Garden City where he spent his entire life.

Robert was married to Joan Leabo, where they were blessed with three daughters. After Joan passed away on June 9, 1979, he later married Judy Douglas Knisley whom passed away December 15, 2017.

Robert was a farmer all his life. He also drove a semi for a short time. He worked at Neco Seeds for many years where he did many different jobs. He loved to read, tell a good story with friends, being on a tractor driving around on the farm, and his dogs.

He was preceded in death by his father, Rolla; his mother, Lela; his first wife, Joan; his second wife, Judy; and a grandson, Brandon.

Graveside services will be 11:00 a.m., Saturday, October 27, 2018 at the Clearfork Cemetery near Garden City, Missouri.

Services are under the care of Dickey Funeral Home, Garden City, Missouri.
To order memorial trees or send flowers to the family in memory of Robert "Bob" Hartzler, please visit our flower store.