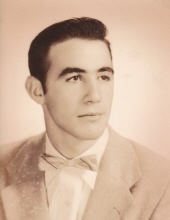 Robert “Bob” Ray Earlywine of Harrisonville, Missouri was born November 21, 1937 in Mount Vernon, Ohio, the son of Dwight Otis and Harriet (Crowe) Earlywine. He departed this life on Tuesday, January 18, 2022 at the Cass Regional Medical Center, Harrisonville at the age of 84 years, 1 month and 28 days.

On September 5, 1964, Bob was united in marriage to Dorothy Jean Stafford in Mount Vernon, Ohio.

Bob was a graduate from Ozark Christian College in 1976 and was ordained as a minister in 1976. He was the pastor at the Christ Church and New Testament Christian in Harrisonville for 30 years. He loved being in the outdoors and growing a vegetable garden every year.

Besides his parents, he was preceded in death by a brother, John Earlywine and a sister, Jayne Mastroianni.

Funeral arrangements were under the direction of the Dickey Funeral Home, Harrisonville, Missouri.
To order memorial trees or send flowers to the family in memory of Robert "Bob" R. Earlywine, please visit our flower store.