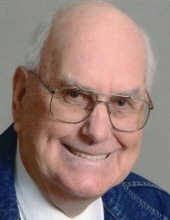 Bob attended Smith-Cotton High School in Sedalia. He went on to serve in the United States Army Air Corps during World War II.

On April 8, 1950, he was united in marriage to Alberta Evon James at the Hickory Grove Baptist Church, Pleasant Hill. She preceded him in death on August 21, 2010.

Bob was employed as a Union Carpenter, Local #777, working for 25 years with Dusselier Foundation Co. and 20 years with J.E. Dunn Construction. Following his retirement, he continued home remodels and additions to many homes in the area. He also worked part-time for Porter Electric. He was an active member of the Big Creek Baptist Church in Pleasant Hill where he served in many capacities, including Sunday School Teacher, Trustee, Deacon, and Deacon Emeritus. Additionally, Bob traveled with the Baptist Builders planting several new churches throughout the United States.

He enjoyed reading, fishing, woodworking, traveling, and was a master at putting jigsaw puzzles together. After Alberta passed away, he became a great cook and loved making Christmas Candy – especially Hershey’s cocoa fudge. He cherished spending time with family, especially his grandchildren.

He is survived by three sons, Bernie (and Joy) Benware of Holden, Rick (and Gretchen) Benware and Bradd (and Chantell) Benware, both of Pleasant Hill; one daughter, Oretta (and Gary) Smith of Raymore; nine grandchildren, Derek (and Sandy), Laura (and Matt), Amanda (and Jeff), David (and Marlena), Patrick (and Christina), Bryan (and Stephanie), Casey, Megan, and Crystal (and Ethan); 13 great grandchildren Carson, Ayden, Logan, Sutton, Lilly, Briley, Lucas, Grayson, Amelia, Brooks, Brewer, Hudson, and Jack; one brother, Roy Benware of Holden; one sister, Rosa Lee (Wesemann) of Harrisonville; many other relatives and friends.

Memorial Contributions are suggested to Samaritan’s Purse – Operation Christmas Child and may be sent in care of the funeral home.

Online condolences may be sent to the family a www.stanleydickeyfuneralhome.com