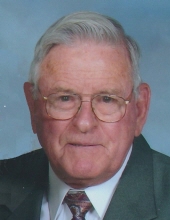 After finishing grade school, Robert helped with the family farm until enlisting in the military at the age of 18. He completed two tours of duty overseas; the first in Okinawa Japan followed by Korea in 1948 - 1952.

After serving in the military, he started a television repair shop and L.P. Gas business with his brother Ervin Vogel. He owned the business for 49 years.

Robert served his church and community in many ways. He was a Eucharistic minister, a member of the Knights of Columbus for 74 years, reaching the fourth degree, a past commander and life member of the VFW, a member of the Montrose City Council for eight years, a volunteer fire fighter with Montrose Fire Department for 25 years and Scoutmaster for Montrose Troop 438 and Paola Troop 100.

Due to the increase in the number of cases of the Delta Virus in Missouri, the family wishes to have a private family service.

The family appreciate your prayers and suggests memorial contributions may be made to the Legion of Mary at Our Lady of Lourdes Catholic Church, Harrisonville, Missouri.
To order memorial trees or send flowers to the family in memory of Robert L. Vogel, please visit our flower store.