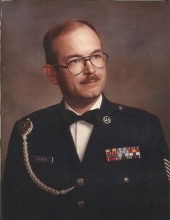 He was born on 6 October 1946 at Grants Pass, Oregon. He was the son of Leonard K. and Irene M. Stevenson and raised in Medford, Oregon. He graduated from St. Mary's School in 1964. He then enlisted in the Air Force on 11 August, 1964, and served for 26 years before retiring on 1 September, 1990. His assignments included tours to Burns AFS, Oregon, Richmond Heights AFS, Florida, Sembach AS, Germany, McChord AFB, Washington, Sparrevohn AFS, Alaska, Lockport AFS, New York, Roanoke Rapids AFS, North Carolina, Luke AFB, Arizona, Lindsey AB, Germany, and Scott AFB, Illinois. Bob received an AA from St. Martin's College, Lacy, Washington, and an AAS in Ground Radar Technology from the Community College of the Air Force (CCAF). He was also trained in computer technician work until his retirement. Bob was always focused on mathematics and, especially, electronics in school. When he was about 15, he used Goolean Algebra and electronics to design and build an electric circuit that solved riddles. He spent a lot of time in Europe repairing strategic 3-dimensional radar.

Robert was preceded in death by his parents, Leonard and Irene.

In lieu of flowers, memorial donations are suggested to Alzheimer’s Association. Condolences may be posted at www.wfh-ofallon.com .

Memorial Graveside Services will be held Saturday, June 15, 2019 at 11:00 a.m. at the Orient Cemetery, Harrisonville, Missouri.