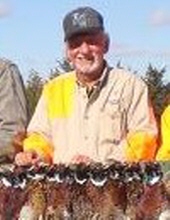 Rodney Curtis Purkey of Harrisonville, MO was born March 2, 1951 in Harrisonville, MO. the son of Dale Purkey and Wilma Mickleberry Purkey. He departed this life on Friday, Sep 20, 2019 at Hospice House in Kansas City, MO. at the age of 68.

He was preceded in death by his parents and his stepfather Robert Wade, 1 brother James "Jamie" Purkey , and one son Johnny.

Rodney was an Army Vietnam Veteran.

Rodney enjoyed hunting all of his life and in the last several years he enjoyed going to South Dakota Pheasant hunting.

Rodney retired from Lake City Army Ammunition in 2005 and enjoyed helping the neighbors and being a handyman for the neighborhood.

Family suggests memorial contributions may be made to the Kansas City Hospice House.

Funeral arrangements are under the direction of the Dickey Funeral Home, Harrisonville, Missouri.
To order memorial trees or send flowers to the family in memory of Rodney C. Purkey, please visit our flower store.