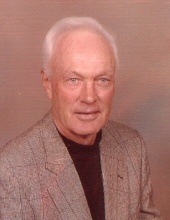 Roger "Oley" Paul Myers, Harrisonville, MO passed into the arms of his Lord and Savior on May 30, 2020.

"Oley", a nickname his father gave him as a young boy was born in Indianola, Nebraska on July 8, 1940. His parents were Delbert (Deb) and Hester (Hess) Eberhardt-Myers. He completed their family along with his brother Rodney.

He was raised on the family farm N.W. of St Francis, KS. He attended the Northrup Country School near his family farm, many times riding his horse. As a young boy, he attended the EUB Church with this parents. He took catechism and was baptized in the E. U. B. Church.

He attended St. Francis High School, graduating with the class of 1957, alongside his brother. Oley lettered in all four years in football, track and wrestling. He later grew to enjoy and love the sport of golf also being actively involved in the St. Francis golf course.

Roger worked at the St. Francis Co-Op, later becoming the Farm Bureau Agency Manager in St. Francis. He also was an active member of the Shriners. He later moved to the West Coast where he worked in the carpentry trade. Roger became the General Manager for Salem Masonry of Salem, Oregon. There wasn't anything that Oley couldn't make, fix, build or rebuild. Nothing too much of a challenge for him. He made friends easily and had many at that. He was very easy going, witty, hard working, non judgmental, caring, supportive, a Golf Channel fanatic and most of all, he loved his God, family and friends. It meant so much to him that he was able to farm the same ground his father and grandfather did. He always felt at home while being behind the wheel of the tractor and was at peace whenever he was working the land. He was proud of his heritage and the love of his Eberhardt "clan" and his special cousin Dee Dee.

Roger has been a resident of Harrisonville, MO for 31 years. He attended the Harrisonville Church of the Nazarene. He enjoyed being a part of the men's prayer group and appreciated the love and support of them throughout these last two years.

He also leaves behind 16 grandchildren and 21 great grandchildren who brought lots of love, laughter and tears to him over the years.

Cremation. A Celebration of Life Service was held Thursday, June 4, 2020 at the Harrisonville Church of the Nazarene, 2305 E. South Street, Harrisonville, Missouri.

The family received friends Thursday, June 4, 2020 at the church.

Memorials may be made to one of the following:

Services are under the care of Dickey Funeral Home, Harrisonville, Missouri.
To order memorial trees or send flowers to the family in memory of Roger Paul Myers, please visit our flower store.