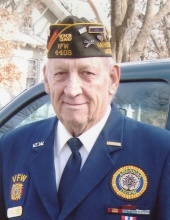 Ronald Dean Sallee of Harrisonville, Missouri was born October 26, 1932 in Independence, Missouri the son of Earl Otis and Velma C. (Hancock) Sallee. He departed this life on Wednesday, December 9, 2020 at his home at the age of 88 years, 1 month and 13 days.

On September 15, 1962, Ronald was united in marriage to Betty Taylor in Peculiar, Missouri.

Ronald was employed as an electronics inspector for Allied Signal, Kansas City, Missouri until his retirement in 1992. He was a Navy Veteran of the Korean War. Ronald was a member of the Harrisonville VFW Post #4409 where he was active in the Honor Guard and was in charge of Bingo for many years. He loved being at his lake house, fishing, camping and being outdoors. Ronald enjoyed being with his family and helping his family and neighbors with different projects.

Besides his parents, he was preceded in death by his wife, Betty Sallee on June 2, 2010; two sons, Dan and Dennis Crownover; a grandson, Zachery Crownover; a great-grandson, Austin Boyer; two brothers, Delbert and Wayne Sallee and a sister, Violet Sands.

Funeral services will be 10:00 a.m., Wednesday, December 16, 2020 at the Dickey Funeral Home, Harrisonville, Missouri with burial in the Orient Cemetery, Harrisonville with Military Honors.

Family suggests memorial contributions may be made to the Alzheimer's Association and may be left at the funeral home.
To order memorial trees or send flowers to the family in memory of Ronald D. Sallee, please visit our flower store.