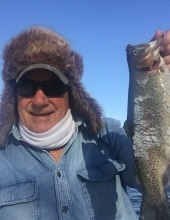 Ronald “Ron” Lee Geraci of Pleasant Hill, Missouri was born August 20, 1946 in Chicago, Illinois the son of Peter and Mary (Nelson) Geraci. He departed this life on Friday, November 5, 2021 at Research Medical Center, Kansas City, Missouri at the age of 75 years, 2 months and 16 days.

On December 16, 2007, Ron was united in marriage to Barbara Lynn Pierce in Warrensburg, Missouri.

Ron was employed as an automotive consultant for Premier Volvo Cars, Overland Park, Kansas for over 20 years until his retirement in 2020. He loved to fish, play tennis, gardening, watching football and was an avid karaoke fan, where he won $500 for his singing of “Beer For My Horses”. Ron enjoyed the latest electronics and had a big collection of R.C. Cars and Drones.

Besides his parents, he was preceded in death by a step-son, Eric Montgomery.

Ron is survived by his wife, Barbara Geraci of the home; a son, Nick Geraci; daughter, Brittony Geraci; a granddaughter, Akyla; two grandsons, Jack and Paxton; two brothers, Joseph and Pete Geraci; a step-son, Mark Brizendine and wife Gina; nieces; nephews; other relatives and many friends.

Funeral service were held Saturday, November 13, 2021 at the Dickey Funeral Home, Harrisonville, Missouri with burial in the Orient Cemetery, Harrisonville.

Family suggests memorial contributions may be made to the Cass County Rescue Mission.
To order memorial trees or send flowers to the family in memory of Ronald "Ron" Lee Geraci, please visit our flower store.