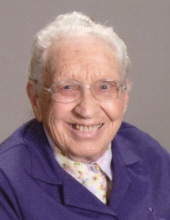 Rose Ellen Grieser Wittrig was born to Jacob O. Grieser and Rachel K. Erb Grieser on February 8, 1919 on a small farm in Beemer, Nebraska. She departed this life on September 18, 2018 just a few months before her 100th birthday.

On March 4, 1941 she married Lyle Wittrig, and they were married 57 years. To this union four children were born: James, who passed in 1993; Edith Miller and husband Jim, of Battlefield, Mo; Dean Wittrig of Garden City; and Joan Campbell, and friend Huston Mische of Harrisonville, Mo.

She grew up in a family of eight children, with lots of relatives being around. There were many good memories and hard times, too, one being when her little sister, Clarice, passed away. Because Rose’s mother was often ill, Rose took over many homemaker duties as a young girl. She was a hard worker who always put others first for the rest of her life.

Rose accepted Jesus as her savior in January, 1932. She was baptized in a small country church, Plum Creek Mennonite Church. (where 12 years later she was married) She still remembers that as a very special time in her life--a pivotal point guiding the rest of her years. On baptism day it was raining and since their car had narrow wheels it couldn’t travel the roads. So Rose’s dad put hay bales in a wagon, loaded Rose’s mother and the kids in and covered them with a tarp as he drove the horse team to church in the rain.

When she was 19 Rose went to Los Angeles, California, where she worked for a Dr. as a maid for one year. She earned the grand sum of $50 a month. While there, she made special friends five of whom wrote in a circle letter which continued for 60 years.

Rose and Lyle lived for 19 years on the Nebraska farm they purchased when first married. They farmed, raised hogs, milked cows and had ducks, chickens, geese, and whatever it took to keep the family going. They also had a large garden which provided most of the food they used. In 1960, they moved to Missouri.

Throughout all Rose and Lyle’s years church was a high priority and when the doors were open, they were there. Throughout the years Rose has served the Lord through teaching Sunday school, Bible school, and on a variety of committees. Lyle and Rose’s home was always open for company for meals and overnight. She said there was no sending people to motels in those days.

Rose loved to travel, but wasn’t able to do as much as she would have liked. She did get to Canada, Hawaii, and Mexico as far as outside the US.

Hobbies included being a gracious hostess to hundreds and hundreds of guests in their home for meals and or overnight. Often she carried meals to others. She had the gift of lovingly counseling others. Gardening and caring for her flowers brought much joy. Reading books was a passion and every year since she was 40 years of age, she read the Bible through at least once each year. Every morning found her in her recliner reading her Bible. A mighty prayer warrior, many received her gift of prayer. She loved sending cards to others. Over the years she embroidered tea towels as gifts, including a set to sell at this year’s fall sale at Sycamore Grove. Years ago someone asked why she made dozens of jars of jam, cinnamon rolls, and pies for the sale. She said “I know what it's like to be hungry.”

We, as children are honored by the legacy left to us by our Godly mother.

Funeral services were held Saturday, September 22, 2018 at the Sycamore Grove Mennonite Church near Garden City, Missouri with burial in the Clearfork Cemetery near Garden City.

Family suggests memorial contributions may be made to the Brotherhood Fund at Sycamore Grove Mennonite Church.
To order memorial trees or send flowers to the family in memory of Rose Ellen Wittrig, please visit our flower store.