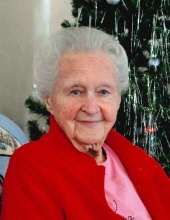 Ruby Ellen Rouse of Brenham, Texas formerly of Harrisonville, Missouri was born July 9, 1923 in Portland, Missouri the daughter of Mark and Sena (Reeves) Needs. She departed this life on Sunday, August 4, 2019 at her home surrounded by love and family at the age of 96 years and 28 days.

On August 22, 1942 Ruby was united in marriage to Lawrence Kenneth Rouse in Harrisonville, Missouri.

Ruby was a homemaker and a loving military wife for 59 years. She had lived in Harrisonville before moving to Brenham, Texas in 2002 to be close to her family.

Besides her parents, Ruby was preceded in death by her husband, Lawrence on October 23, 2001; a brother, Everett and a sister, Fern.

Arrangements are under the care of Dickey Funeral Home, Harrisonvillle, Missouri.
To order memorial trees or send flowers to the family in memory of Ruby Ellen Rouse, please visit our flower store.