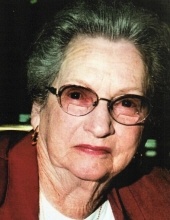 Ruby moved out to Western Kansas at an early age and moved to Adrian, Missouri as a teenager. She was a 1936 Adrian High School graduate.

Ruby and Charles owned and operated the O’Malley’s Outlet Clothing stores in Kansas City. She had also worked for a period of time at Bendex. She was a gifted seamstress and made many wonderful quilts. She was a former member of the St. Roberts Bellarmine Catholic Church in Blue Springs and was currently a member of Our Lady of the Presentation Catholic Church in Lee’s Summit. She enjoyed making porcelain dolls and was a member of the Mid-America Doll Club; she won numerous awards for her creations.

Ruby was preceded in death by her parents; two brothers, Cecil Reynolds and Floyd Reynolds; one sister, Edna Ferris; her stepson, Michael O’Malley; and her step-daughter, Patty Ruth.

Private burial will be in the Mt. Olivet Cemetery, Kansas City. A memorial service will be held at a later date.

Memorial contributions are suggested to Our Lady of the Presentation Catholic Church and may be sent in care of the funeral home.