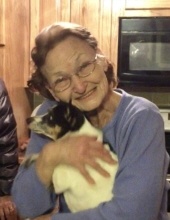 Ruby Joyce Reid, of Creighton, Missouri was born June 23, 1934 near Fairfax, Missouri the daughter of William Benjamin and Edna (Lee) Mattingly. She departed this life on Friday, October 26, 2018 at the Research Medical Center, Kansas City, Missouri at the age of 84 years, 4 months and 3 days.

On March 29, 1952, Ruby was united in marriage to Richard Allen Reid in Ft. Smith, Arkansas.

Ruby was a homemaker and helped Richard operate Reid Charter Buses for 16 years. The most important things in her life was God and family and cared for everybody. She was a member of the Creighton First Baptist Church. Ruby was very artistic and enjoyed painting, drawing, needle work, doing crafts and writing short stories and poems.

Besides her parents, she was preceded in death by her husband, Richard Reid on January 4, 2010; a son, Dennis Richard Reid on February 24, 1999; a sister, Wanda and two brothers, Irvin and Bill.

Funeral arrangements are under the direction of the Dickey Funeral Home, Garden City, Missouri.
To order memorial trees or send flowers to the family in memory of Ruby Joyce Reid, please visit our flower store.