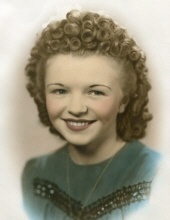 Ruby Mildred (Anderson) Meade Clark (Hot Lips) passed peacefully into the arms of her Savior on Friday, July 12, 2019. She was born the 4th child of James Adam and Ella Ethel (Sanders) Anderson in Crane, MO on November 29, 1925.

She was raised on Anderson Ridge at the horseshoe bend of Crane Creek off the Old Bluff Road south of Hurley, MO. After graduation, she moved to Kansas City where worked at Sears with her sister Mary. On March 30, 1945, she was chosen as a Sears Pin-up Girl in WWII and later that year married James Meade from Hurley, MO. She was baptized on May 10, 1964 at Ruskin Heights Lutheran Church in Kansas City, MO and spent most her life as a homemaker, raising her two children. Ruby moved back to KC, after living in California, Utah, and New York, and worked at Woolworths. Ruby had an off-the-cuff sense of humor and was not afraid to speak her mind. She could be a little spit fire which was attributed to her short 4’5” Anderson Stature. She once boasted she was a dead aim with a rock and could defend herself quite well. She was affectionately called Hot Lips by her grandsons, Ricky (Richard) and Wesley, whom she helped raise. When she would get mad or upset, her grandsons would always say, “Quit percolating, Hot Lips.”

Ruby always wore hi-heel shoes to make her look taller. She took great pride in her appearance and always looked like she just walked out of a beauty shop. Advance notice was given to go anywhere as it took her forever to get dressed, pick out her matching jewelry and put on her makeup, which she carried in a rather large cosmetic case.

Ruby never learned to drive because she said she couldn’t reach the control peddles but she loved shopping with anyone who would take her. She had closets full of matching clothes and shoes, usually bought in the children’s department. She was generous and thoughtful, and often bought for others who took her shopping. When she was younger, she sent clothes from the Big City to her little sister, Peggy while she was still on the farm in Hurley. She loved her COKE and drank it until the day she died. She loved to sweep the house and porch with a straw broom and her house was always clean. Her bathroom was decorated in frogs and elf ceramics adorned her living area.

Ruby first married James Meade and had two children: Jimmy Gale Meade and Connie Lynn (Meade) Mullen. After they divorced, she met and married Roy Clark while working at Woolworths in September of 1984. Ruby took great pride in her family and spoke lovingly of her children, grandchildren and great-grandchildren.

She was preceded in death by her parents, James and Ella Anderson, her husband, Roy Clark, a son, Jimmy, four siblings and their spouses, Howard and Lena Anderson, Mary and Earnest Boyd, Milford and Thelma Anderson, and Doris and Willis Barnett, and ex-husband, James Meade.

Ruby is survived by her daughter and caretaker, Connie Mullen, Harrisonville, MO, her two sons: Richard (Ricky) Anderson and his wife, Amanda and twins, Sawyer Grace and Imogen Ruby of Independence, MO and Wayne Wesley Mullen and his wife, Kimberly, and his two sons Malaki and Paxton of Ozark, MO. Jimmy’s wife, Phyllis, of Pleasant Hill, MO and their four children: Denise Suzel Harris of Greenville, MO and her son Willy Harris of Pleasant Hill, MO, James Maurice Meade (Bubba) and his wife, Cassandra, and their children Ava, Riley, and Jett James of Pleasant Hill, MO and Christopher Shane Meade and his two children, Sage and Lela of Lake Winnebago, MO, and Jesse Gibbons Meade, Austin TX. She also leaves a step son Dennis Clark and his two children and her youngest sister, Peggy Anderson Caldwell and husband, David of Marionville, MO.

Ruby will be forever remembered as a loving Mother, Grandmother, and Great Grandmother, Sister, and Aunt to ALL of her nieces and nephews and she will be missed by all that knew her. One of the last things she said was: “Everything is just water under the bridge; everyone just needs to get along”. She is flying with the angels today and singing the graces of GOD.

Ruby chose to be cremated and there will be a memorial on July 27th at 2pm at the Harrisonville Meadows Community center on Lincoln Rd. in Harrisonville, MO.
To order memorial trees or send flowers to the family in memory of Ruby Mildred Clark, please visit our flower store.