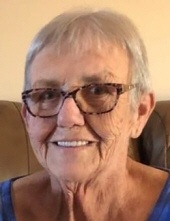 Sharon Ann Clark of Harrisonville, Missouri was born September 1, 1944 in Mt. Vernon, Missouri the daughter of JC and Ester (Gilman) Baker. She departed this life on Monday, October 1, 2018 at the University of Kansas Medical Center, Kansas City, Kansas surrounded by love and family at the age of 74 years and 1 month.

On April 9, 1966, Sharon was united in marriage to Glen Robert Clark Jr. in Kansas City, Missouri.

Sharon was employed at Milgrim's Grocery Store as checker and Western Electric. After moving to Garden City, she and Glen opened Clark's Greenhouse where she was "Chief Sales Lady" and operator for nearly 25 years. Sharon was also a school bus driver to Sherwood School District while her daughters were in high school. Sharon and Glen enjoyed traveling and after retirement they spent many winters in Arizona, Texas and Florida. They also enjoyed taking their grandkids on yearly trips. Camping was a favorite and for several years they were members of the Kansas City Airstream Club. Sharon was an auxiliary and volunteer at Cass Regional Medical Center. She also enjoyed sewing, playing bingo, gardening and playing cards with friends.

Besides her parents, she was preceded in death by her step-father, Herb McGill.

The family received friends Friday, October 5, 2018 at the funeral home.

Family suggests memorial contributions may be made to the Clearfork Cemetery Association.
To order memorial trees or send flowers to the family in memory of Sharon A. Clark, please visit our flower store.