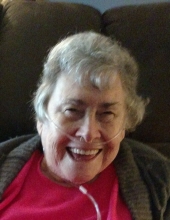 Shirley Anna Webb was born on August 15, 1941 and passed peacefully in her sleep on June 18, 2021. She was born in Blytheville, Arkansas to Mallard “Bennie” Webb and Elvie Hembree and the 4th in line to 10 brothers and sisters.

She is survived by her brother Ben Webb, Jerry Webb, Tom Webb and one sister, Nancy Layne. She is preceded in death by her parents and brothers; Ray Dale, Richard, Jimmy, and sisters Patsy Ruth and Marilyn. Her legacy included 3 children Cindy Kane, Chad Thomas Rees II, and Diane Zeiler. She is also survived by many grandchildren, great-grandchildren, and so many others whose life she touched. She is preceded in death by her husband Chad Thomas Rees and they will be laid to rest together.

After raising her children she went to college and graduated with a Bachelor's Degree in 1991. She proudly paid off her school loans in October of 2001. She worked as a Librarian at Mid Continent Public Libraries until her retirement in 2006. She enjoyed reading, crotchet, playing cards, and was never afraid to try something new. Pink was her absolute favorite color and she loved chocolate.

Funeral services will be 2:00 p.m., Wednesday, June 23, 2021 at the Dickey Funeral Home, Harrisonville, Missouri with burial in the Oakland Cemetery, Harrisonville.

Family will receive friends from 1:00 p.m. until 2:00 p.m., Wednesday, June 23, 2021 at the funeral home.
To order memorial trees or send flowers to the family in memory of Shirley A. Webb, please visit our flower store.