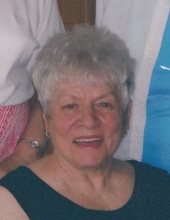 Shirley Ann Ammon of Peculiar, Missouri was born July 24, 1933 in Kansas City, Missouri the daughter of Allen Lewis and Eva Cecelia (Craig) Payton. She departed this life on Thursday, November 29, 2018 at Crown Care Center, Harrisonville, Missouri at the age of 85 years, 4 months and 5 days.

Shirley was a homemaker. She was a gifted painter and enjoyed dancing in her younger years. Shirley had lived in Kansas City before moving to Harrisonville to be close to her daughter, Andi.

Besides her parents, Shirley was preceded in death by her son, Mike and her two brothers, Billy and Charles.

She is survived by her daughter, Andi Swigart, three sons, Tom, Brett and Brad Ammon; seven grandchildren; other relatives and a host of friends.

The family suggest that memorial contributions may be made to Hope Haven and may be sent in care of Dickey Funeral Home, P.O. Box 432, Harrisonville, Missouri 64701.
To order memorial trees or send flowers to the family in memory of Shirley Ann Ammon, please visit our flower store.