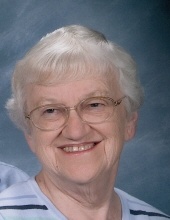 Born on January 13, 1932, to Edward and Ophelia Davis, Shirley grew up in a loving home surrounded by many cousins and friends. She loved her siblings with all her heart: Joyce, Marjorie, Odelia, Stanley, and Rosemary; their friendships lasted throughout their lives. She enjoyed growing up on her family’s farm and attended Lockwood High School. After two years of college she became a rural school teacher. Shirley then moved to Kansas City where she worked as an I/T manager at AT&T for multiple years. During this period of her life she enjoyed city life, Elvis’s music, movies, bowling, her friends, her church, and playing football until a broken arm took her out of the game.

Shirley met her fun-loving husband, Jim, through the single’s group at their churches in the early 1970’s. They were married on February 3, 1973, and celebrated their 46th wedding anniversary this year. She fulfilled her lifelong dream of becoming a mother with the births of her son Jason and daughter Christina. Shirley and Jim moved their family to Harrisonville, Missouri, in 1980 where she was a devoted mother and homemaker for the rest of her life.

Shirley enjoyed gardening, growing Iris and many other flowers, working jigsaw puzzles, reading, crocheting and sewing, and traveling with her sisters in later life. She drove over much of the United States taking her sisters on trips and seeing the country. She was very active in the United Methodist Women’s group and enjoyed many friends there.

Four of her greatest joys were her granddaughters Rowan, Emily, Brecken, and Hailey. She taught them how to love, how to treat others, how to play nice, how to play with Play-doh, a love for puzzles and games, and a love for being outdoors. She read many books and sang many songs to them while enjoying every moment that she could with her babies.

Shirley is survived by her husband, Jim Carter of the home; her son, Jason Carter and his wife Camby of Morton, Illinois; her daughter, Christi Feagins and her husband Bob of Raymore, Missouri; a sister, Odelia Mayfield; multiple nieces and nephews; and four beloved granddaughters.

A Celebration of Life Service was held Saturday, March 9, 2019 at the United Methodist Church, Harrisonville, Missouri with a reception to follow.

The family suggests in lieu of flowers memorial contributions may be made to the United Methodist Church Memorial Fund, Harrisonville, Missouri and may be sent in care of Dickey Funeral Home, P.O. Box 432 Harrisonville, Missouri, 64701.
To order memorial trees or send flowers to the family in memory of Shirley Lorraine Carter, please visit our flower store.