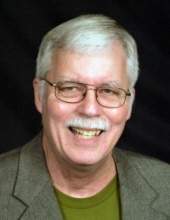 Steve grew up in Wichita and graduated from North High in 1961. He honorably served his country as a Navy Corpsman, assigned to the 3rd Marines in Vietnam. He returned home and completed his BA at Newman University in 1976 on the GI Bill. Steve worked in retail management at Sheplers and J.C. Penney; as a Laboratory Technician at Wichita area hospitals, and later Racon Chemical. Steve’s last employment was with the Kansas Department of Corrections from where he retired following an on the job injury.

Steve was a Christian and always wanted to serve his fellow man. In Vietnam, he not only cared for America’s wounded soldiers, but volunteered and assisted the Vietnamese people at the Catholic orphanages and medical clinics. In later years, Steve enjoyed and volunteered on church mission trips to Mexico and at the Lord’s Diner in Wichita until his health would no longer permit.

Steve and Diana loved Music Theater, movies, antiquing, researching genealogy, travelling and their couple’s bunco group. Steve encouraged Diana to travel, and they visited Germany, Italy, Jerusalem, the Caribbean Islands, the Mayan ruins and both the Atlantic and Pacific coasts of Mexico, as well as much of the United States.

Private inurnment will be at the Calvary Catholic Cemetery, Augusta, Kansas at a later date.

In lieu of flowers, memorials may be made to St. Bridget Catholic Church, or to the Scuka Scholarship Fund that Steve and Diana previously established at Newman University, Wichita, Kansas.