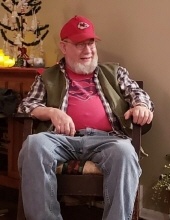 Stephen Anthony McMahon, 71, of Belton, was born, August 6, 1948, in Lowell, Massachusetts, the son of Thaddeus A. and Beulah N. (McCrery) McMahon. He departed this life, Tuesday, November 19, 2019, at the Research Medical Center in Kansas City.

In 1977 he was united in marriage to Jean Kay (Eblen) Dickerson in Kansas City.

Stephen was employed as a Glazier for Sols Glass in Kansas City, Kansas. Previously he had worked for the Hopcross Stained Glass Company in Kansas City and for the Anaconda wire manufacturer. He was a member of the United Glaziers Union Local #558. He enjoyed hunting, fishing, camping, and collecting beer steins, beer glasses, and belt buckles. Stephen was also an avid bowler and amateur photographer.

He is survived by two grandchildren, Kya Ann Jenkins and Fallon Anthony McMahon; four step-sons, Donald Dickerson of Harrisonville, Daniel (Jill) Dickerson of Eudora, Kansas, Dennis Dickerson of Florida, and Darrin (and Stacy) Dickerson of Peculiar; one step-daughter, Michelle Leann Hensley of Independence; one brother, Phillip (and Roberta) McMahon of Grandview; two sisters, Marlene (and Bill) Eager of Lone Jack, and Victoria Lewis of Belton; several other grandchildren; numerous nieces and nephews; other relatives and friends.

A memorial service will be held 3:00 p.m. Sunday, December 1, 2019, at the funeral home. Mr. Dennis Pittman will officiate. Inurnment will be in the Belton Cemetery at a later date.

Memorial contributions are suggested to the Salvation Army and may be sent in care of the funeral home.