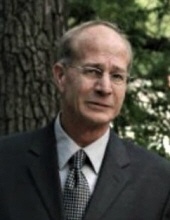 Steve Meyers, 62, Harrisonville, Missouri departed this life on Monday, October 26, 2020 at his home surrounded by love and family.

Steve was devoted to his wife, Paula Griff Meyers and sons Maxwell (Max) and Samuel (Sam). He worked long hours as “the friendly plumber” to provide for his family. He supported Max in his Christian education, multiple sports activities and Boy Scout outings – sacrificing his back to hard cots and his ears to the cold as a monitor on many an overnight.

He was the rock with a soft spot for Sam, who has struggled all of his 17 years with autism and the paralyzing effects of a debilitating stroke suffered when he was five months old. Steve’s patience, calming voice and long car rides for donuts and sodas helped Sam progress more than anyone thought possible.

“Steve was an incredible dad. He would do anything for his kids,” said Paula. “He was a peacemaker, something he passed on to Max, of whom he was so proud.”

The sixth of nine Meyers siblings, Steve became the man of the house on Madison Street at the age of 11, when his father, George Meyers, passed away from cancer. He stoically endured the whirlwind of seven sisters, and mentored his younger brother John (J.T.). When his sister, Robin, was recovering from critical injuries sustained in a motorcycle accident, he lovingly carried her up and down the stairs during her long recovery at home.
Although Steve had no daughters of his own, he walked no fewer than four sisters and nieces down the aisle at their weddings.

Steve met his wife, Paula Griff, at a mutual friend’s wedding. “I saw his kindness as I watched him calm a friend who was quadriplegic, quite nervous over a myriad of men arranging to transport him home via pick-up truck as his van transport was beyond late,” recalled Paula. “His empathy and kindness were so refreshing in a man;’ I told my girlfriend Veronica standing next to me that ‘I liked him’, and that’s all it took, the matchmaker set to task,” and Paula and Steve were married one year later, in May of 1997.

He learned the plumbing trade at Rodriguez Mechanical, under the tutelage of his brother-in-law, Paul Rodriguez and his sister Maxine Meyers Rodriguez, before setting up his own business, called simply “Steve The Plumber,” He built a loyal clientele who trusted him and who couldn’t resist his smile and his unfailing optimism.

The family wishes to thank Crossroads Hospice and Father Dan Reardon for tending to Steve’s physical and spiritual needs during the last days of his mercifully short battle with cancer.

If you can't attend the service, please click on the link to join us live stream for pictures 10:00 a.m. - 10:30 a.m. with the service at 10:30 a.m.
http://bit.ly/stevemeyers
To order memorial trees or send flowers to the family in memory of Steven "Steve" G. Meyers, please visit our flower store.