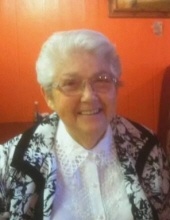 Sylvia Clarissa Nelson was born December 3, 1931 in Iowa City, Iowa. She was the daughter of Tillie Mae Hess and Oliver Guy Frederick Hess. Oliver was her adoptive father but the only father she ever knew and they were very close. She was very proud of the Hess name and legacy.

From her parents she developed a love for the land, a love for family, and a respect for the simple things of life. As a young woman she and her family moved to Wichita, Kansas. There she met Vaughan Eldon Nelson and they were married in 1952. They lived an adventuresome life. Employment took them to Spokane Washington and within a few years to various places all over the western United States requiring them to move every 3-9 months. A change in employment led them to Missouri where they settled on a farm and built a house. When retirement came, they began a new adventure as full-time RV’ers. This adventure took them to 49 states, Mexico, and most of the Canadian provinces. When they quit traveling, she and Eldon worked at restoring a 1953 GMC pickup that belonged to her paternal grandfather and a 1962 Corvair which they took to many car shows. Sylvia was a person of faith in the Lord Jesus Christ. As a young person she asked Christ to forgive her of her sin and to come into her life and be her savior. She was an active Christian servant and was a member of Christ Christian Church in Urich, Missouri. Sylvia’s life on earth ended on November, 5. 2021. her full life on earth ended and she began a new journey in heaven.

She was preceded in death by her parents, son-in-law Jamie Purkey, sister Ann Perry and brother-in-law Richard Perry.

Visitation will be held at Christ's Christian Church, 830 NW 1271 Road, Urich, Missouri from 12:30 PM until 2:00 PM on Tuesday November 9 with funeral services beginning at 2:00 PM. Burial will follow in Hickory Grove Cemetery. Pastor Dalton Walker and son-in-law Brent Cloyd will be officiating.

Family suggests memorial contributions may be made to Christ's Christian Church Memorial Fund.

Funeral arrangements are under the direction of the Dickey Funeral Home, Harrisonville, Missouri.
To order memorial trees or send flowers to the family in memory of Sylvia Clarissa Nelson, please visit our flower store.