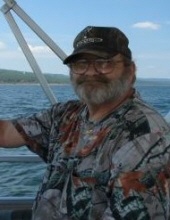 Talbot Edward “Tab” Walker, 72, of Pleasant Hill, Missouri, formerly of Fremont, Missouri, was born, September 16, 1947, in Ft. Smith, Arkansas, the son of Talbot A. and Anna S. (Moss) Walker. He departed this life, Saturday, February 8, 2020, at the Lee’s Summit Medical Center surrounded with love and family.

He was a United States Navy, Vietnam War Veteran earning three Purple Hearts and the Bronze Star Medal with Combat "V" for Heroic Achievement in Vietnam.

On April 26, 1976, he was united in marriage to Patricia Ludecke in New Orleans; they later divorced.

Tab was a River Boat Captain for the Missouri River Queen and the Spirit of St. Joseph. He was a member of the V.F.W. Post #3118, Pleasant Hill, the Mobile Riverine Force Association, and the National Rifle Association.

Tab was preceded in death by his parents.

He is survived by one son, Talbot “Bo” (and Rosetta) Walker of Pleasant Hill; one daughter, Kristan Main of Leeton, Missouri; four grandchildren, Chelsea Walker of Lee’s Summit, Rebekah Kirk and Morgan Main, both of Raytown, Missouri, and Hunter Talbot Walker of Pleasant Hill; one great grandchild, Damien Kirk; two brothers, Norman K. (and Cheryl) Walker of Hattiesburg, Mississippi, and Mark (and Mar) Walker of Stevens Point, Wisconsin; two sisters, Cherry Blake, and Cindy (and Ralph) Rodriguez both of Metairie, Louisiana; other relatives and friends.

Visitation was held from 10:00 a.m. until service time.

Interment is in the Arlington National Cemetery at a later date.