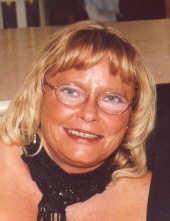 Tammy Sue Tolly, of Creighton, Missouri was born March 14, 1960 the daughter of Lloyd and Esther May (Robison) King. She departed this life on Saturday, April 6, 2019 at her home surrounded by love and family at the age of 59 years and 23 days.

On December 30, 1984, Tammy was united in marriage to Lewis Lester Tolly in Miami, Oklahoma.

Tammy was employed as a business office manager for several nursing homes and earlier was in the banking business. She helped coach softball and was a competitive diver in high school. Tammy loved to crochet and made the most beautiful afghans. She was a hard worker, very intelligent and had a great sense of humor. Tammy was a great wife, mom and grandmother, aunt and sister and her grandchildren were the love of her life. She will be greatly missed by all who knew her.

Besides her parents, she was preceded in death by her son, Ronnie E. Faulkner Jr. on April 22, 2017 and a sister, Virginia McCarthy.

The family received friends on at the funeral home.
To order memorial trees or send flowers to the family in memory of Tammy Sue Tolly, please visit our flower store.