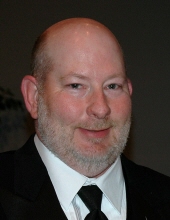 Terry Dale Johnson, of Garden City, Missouri, was born December 17, 1961 in Monett, Missouri the son of Donald Leroy and Ruth Arlene (Schnake) Johnson. He departed this life on Friday, December 6, 2019 at his home at the age of 57 years, 11 months and 19 days.

On December 16, 2006, Terry was united in marriage to Pamela Marie (Sivils) Huey in Harrisonville, Missouri.

Terry was employed as a carpenter for Truman Medical Center, Kansas City, Missouri. He was a member of the Carpenters Union Local #777, Harrisonville. Terry loved woodworking and made furniture, cabinets and other items for family and friends. He collected Coca-Cola memorabilia and enjoyed traveling with Pam and going to auctions. Terry was known as “Papa T” to his grandchildren and was described and the person to “give you the shirt off his back”.

Besides his parents, he was preceded in death by a sister-in-law, Debbie Johnson.

The family received friends Friday, December 13, 2019 at the funeral home.

Family suggests memorial contributions may be made to the American Cancer Society.
To order memorial trees or send flowers to the family in memory of Terry Dale Johnson, please visit our flower store.