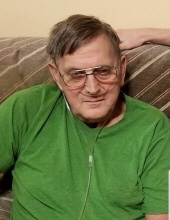 Terry Lynn Baker, of Urich, Missouri was born July 31, 1948 in Harrisonville, Missouri the son of Randall Alva and Helen Orla (Beel) Baker. He departed this life on Wednesday, August 1, 2018 at his home at the age of 70 years and 1 day.

On January 26, 1973, Terry was united in marriage to Roberta Lea Bryant in Garden City, Missouri.

Terry was employed as a truck driver. He was a Navy Veteran of the Vietnam War. Terry loved to do woodworking, jigsaw puzzles, fish and read, but his greatest joy was being with his grandkids.

Besides his parents, he was preceded in death by his brother, Earl Baker.

Cremation. A Celebration of Life Service will be held 7:30 p.m., Friday, August 10, 2018 at the Dickey Funeral Home, Garden City, Missouri with Military Honors to follow.

Family suggests memorial contributions may be made to Heartland Hospice.
To order memorial trees or send flowers to the family in memory of Terry L. Baker, please visit our flower store.