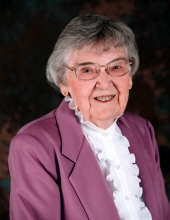 Verda was raised on a dairy farm near East Lynne, and attended Lone Elm Elementary School through eighth grade, and Harrisonville High School, where she enjoyed playing basketball for the highly successful team. She met her husband-to-be, William M. (Bill) Day, at the University of Missouri during her freshman year there, and they were married September 2, 1943 in Columbia.

The Days lived in Advance and Washington, Missouri for several years where Bill taught Vocational Agriculture. From there they moved to a farm outside Harrisonville, and then to a home in Harrisonville, where they lived for 65 years. During that time Bill taught school and later sold Farm Bureau Life Insurance, while Verda raised their four sons. In 1963 Verda was appointed to the position of City Clerk of Harrisonville, serving in that position for 24 years. She was actively involved with professional organizations throughout her career, serving as President of the Missouri City Clerk and Finance Office Association in the early 1980s. She was a long-time member of the Progressive Priscillas Extension/Homemakers Club and the Harrisonville Lions Club. Verda was an active member of the Harrisonville United Methodist Church, having sung in the choir, participated in United Methodist Women, and “The Bible Class” Sunday School class.

Verda was recognized for her service to the community by being named Harrisonville Citizen of the Year in 1991. She was inducted into the Harrisonville High School Wall of Fame in 2008. Verda loved the Lord with all her heart, and that love was reflected in the way she lived.

Visitation will be held at the Dickey Funeral home in Harrisonville on Tuesday, October 19, from 6:00 to 8:00 p.m. Services will be at the Harrisonville United Methodist Church on Wednesday, October 20, at 10:00 a.m. Burial will be at Orient Cemetery in Harrisonville following the funeral. Memorial contributions may be made to the church or to the Lions Sight and Hearing Foundation.
To order memorial trees or send flowers to the family in memory of Verda Bernice Day, please visit our flower store.