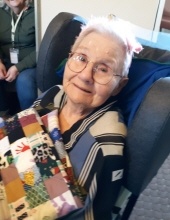 Viola Marie Huiatt, of Harrisonville, Missouri, was born March 10, 1927 in West Line, Missouri the daughter of Ernest Ray and Lillie Mae (Musick) Maloney. She departed this life on Monday, May 4, 2020 at the Crown Care Center, Harrisonville at the age of 93 years, 1 month and 24 days.

On December 1, 1950, Marie was united in marriage to Junior Dick Huiatt in Kansas City, Missouri.

Marie was employed as an Accounting Supervisor for BMA Insurance Company, Kansas City, Missouri until her retirement. She was a member of the Faith Baptist Church, Harrisonville.

Besides her parents, she was preceded in death by her husband, Junior Huiatt on February 22, 2009; two sisters, Lavone Croson and Dixie Mae Allen; three brother-in-laws, Charles Croson, Charles B. Land and Charles Allen.

Funeral arrangements are under the direction of the Dickey Funeral Home, Harrisonville, Missouri.
To order memorial trees or send flowers to the family in memory of Viola Marie Huiatt, please visit our flower store.