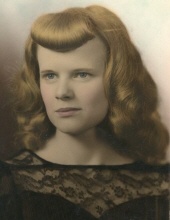 Vivian Marie Kidd of Harrisonville, Missouri was born July 6, 1933 in Weir, Kansas the daughter of George H. and Effie Marie (Kinder) Bennett. She departed this life on Tuesday, December 15, 2020 surrounded by love and family at the age of 87 years, 5 months and 9 days.

On May 3, 1957, Vivian was united in marriage to John David Kidd in Harrisonville, Missouri.

Vivian was a homemaker. She was a member of the United Methodist Church, Harrisonville, Missouri. Vivian was a former Den Mother and enjoyed reading, growing flowers and putting puzzles together. She had lived in Weir, Kansas before moving to Harrisonville.

Besides her parents, Vivian was preceded in death by her husband,, John Kidd on November 1, 2000; and her brother, David Bennett.

The family received friends Saturday, December 19, 2020 from 1:00 p.m. - 2:00 p.m. at the funeral home.
To order memorial trees or send flowers to the family in memory of Vivian Marie Kidd, please visit our flower store.