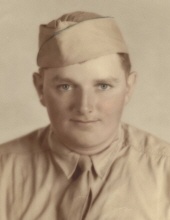 Walter Johnson, 95, of Pleasant Hill, Missouri, was born January 16th, 1924 in Greenwood, Missouri, the son of James Cloud and Carrie (Hale) Johnson. He departed this life on Wednesday, May 22nd, 2019, at the Village House Hospice at John Knox Village.

Walter served his country during World War II in the U.S. Army’s 7th Calvary of the 1st Infantry, fighting in the Pacific theatre, including the Philippines and Occupied Japan. After WW II ended, he returned to Pleasant Hill, where he was a machinist at several companies in the Kansas City area.

On October 14, 1951 Walter was united in marriage to Georgia Fields in Pattonsburg, Missouri. She preceded him in death on December 28, 2015.

Walter wanted to be remembered as a farmer, having farmed most of his life around Pleasant Hill. He was a lifelong beekeeper and avid sportsman, enjoying hunting and fishing.

Walter was preceded in death by his parents; his wife of 64 years, Georgia; one daughter, Mary Louise Johnson-Elves; his brothers, James Thomas (and Rosa) Johnson, Charles Edward (and Marie) Johnson, Terry (and Delores) Johnson; and his sister Mary Jane Holtzclaw.

Services will be held 10:30 a.m. Friday, May 31, 2019, at the funeral home. Graveside military services and Interment will follow in the Pleasant Hill Cemetery, with full military honors by the U.S Army and the V.F.W. Post #3118 Honor Guard. Casket bearers are Jim Johnson, John Johnson,David Kosfeld, Larry Kosfeld, H.A.Todd, & Paul Whaley.

In lieu of flowers, memorial contributions are suggested to the VFW Post #3118 Veteran’s Relief Fund or Village House Hospice and may be sent in care of the funeral home.