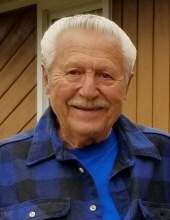 Warren Dale Marriott of Harrisonville, Missouri was born February 21, 1937 in Versailles, Missouri the son of Herschel Jackson and Neva Alice (Raines) Marriott. He departed this life on Monday, February 21, 2022 at his home surrounded by love and family at the age of 85 years.

On November 1, 1957, Warren was united in marriage to Edna Elizabeth Morgan in Bernalillo, New Mexico.

Warren was employed as a manager at the Ford Motor Company Parts Depo in Lenexa, Kansas until his retirement in 1987 and a member of the United Auto Workers Union #249, Kansas City, Missouri. He was an Air Force veteran of the Korean War. Warren was an outdoors man who loved to fish and go to New Mexico to hunt Elk and Antelope and hunt deer on his sister’s property in Stover, Missouri. He was a gun collector and firearms dealer. Warren loved football and baseball, was an avid Royals and Chiefs fan and loved going to his grandchildren’s sporting events. He was known as a “car nut” and enjoyed working on and modifying his cars. Warren had lived in Ruskin Heights and lived through the Ruskin Heights Tornado before moving to his place near Harrisonville.

Besides his parents, he was preceded in death by 4 brothers, Kenny, Glenn, Ronnie and Denny Marriott.


Funeral services were held Saturday, February 26, 2022 at the Dickey Funeral Home, Harrisonville, Missouri. Burial will be in the Orient Cemetery, Harrisonville with Military Honors.

To view video click on Tribute wall.
To order memorial trees or send flowers to the family in memory of Warren Dale Marriott, please visit our flower store.