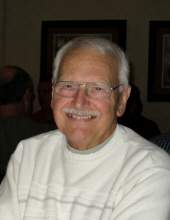 In 1954 Wayne enlisted as a Machinist Mate in the US. Navy post Korean conflict and sailed around the world aboard USS Midway. He was honorably discharged in 1956.

On August 2, 1957, Wayne was united in marriage to Evelyn Woods in Garden City, Missouri.

Wayne was employed with Southwestern Bell, Kansas City, Missouri where he started as a lineman, went to inside installer and then to engineer until his retirement in 1993. Wayne was a member of the First Baptist Church, Harrisonville where he served as a deacon, on the building committee and drove the bus to church camp. He served as President of the Harrisonville Youth Baseball Program, on the Booster Club, President of the Band Booster Club and drove “Big Blue” to band competitions. Wayne was also a Scottish Rite in the Masons, was a Shriner and served as President of the Shriner’s Enrollment Committee for new Shriners and also was in the Legion of Honor. He enjoyed reading, spending time with family and friends, investing and keeping current on the Stock Market, doing yard work and having a well-manicured yard. Wayne and Evelyn loved to travel especially to Hawaii, Utah and Jamesport.

Besides his parents, he was preceded in death by his wife Evelyn Dykes on December 26, 2010; two sisters, Mary Brown and Lois Phillips.

Cremation. A Celebration of Life Service was held at 11:00 a.m., Saturday, April 23, 2022 at the Dickey Funeral Home, Harrisonville, Missouri.

Family suggests memorial contributions may be made to the Alzheimer's Association.

To order memorial trees or send flowers to the family in memory of Wayne Dykes, please visit our flower store.