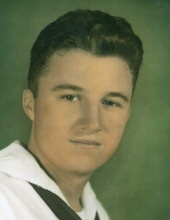 Willard Dean Hodges, of Garden City, Missouri was born August 4, 1929 in Lake City, Arkansas the son of H.C. and Julia (Bolding) Hodges. He departed this life on Saturday, April 24, 2021 at Golden Years Care Services, Harrisonville, Missouri at the age of 91 years, 8 months and 20 days.

On March 27, 1967, Willard was united in marriage to Elsie Lee Green in Sedalia, Missouri.

Willard was employed as a carpenter and was a member of the Carpenters Union. He was a 2nd Class Gunners Mate serving on an Escort Ship in the US Navy. He loved to fish and enjoyed growing a vegetable garden.

Besides his parents, he was preceded in death by his wife, Elsie Hodges on April 12, 2005; two daughters, Debbie Sulser and Lucille Williams; his siblings, .Lynnoyette, Melbourne, Laverne, Donald, Joseph David, Willard, Carolyn Sue, and John.

Cremation. No service scheduled at this time.

Funeral arrangements are under the direction of the Dickey Funeral Home, Harrisonville, Missouri
To order memorial trees or send flowers to the family in memory of Willard D. Hodges, please visit our flower store.