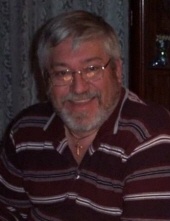 Bill started work at King Radio in 1973. Bill then started working at Honeywell, June of 84. He liked his job since he was able to travel a lot. He married Jeanie on February 8th, 2003. He retired from Honeywell Kansas City Mo. in 2012.

At home he did a lot of honey do's, He loved his kids and grandkids. Also liked doing yard work, especially mowing the yard. He loved his motorcycle, enjoyed just riding around town and small trips. Enjoyed riding Jesse and the grandkids on the motorcycle. He also liked to do some camping and boating.

Bill was preceded in death by his parents, Walt & Rosa Lee Wesemann.

Family suggest memorial contributions may be made to American Cancer Society or the National Kidney Foundation.

To order memorial trees or send flowers to the family in memory of William "Bill" E. Wesemann, please visit our flower store.