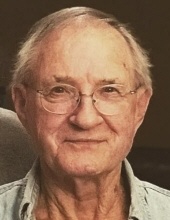 On January 2, 1966, Bill was united in marriage to Connie Jo Hudson at the Christian Church in Urich, Missouri.

Bill had many different occupations in his life time. After graduating high school, he joined the United States Air Force. He was a proud Air Force veteran of the Vietnam War. Bill went to Spartan Aeronautical School and received AEP Licenses to work on airplanes. Then Bill got his private pilots license. He went to Texas to join some of his fellow comrades at a small private owned airport using all of his skills. After some training from his father-in-law, Gil Hudson, he took over and ran Hudson Garage in Urich, Missouri working on cars and farm machinery. After Hudson's Garage closed, he went to work as a mechanic for Asphalt Sales Company in Kansas until his retirement in 2003. Bill loved to fish, being with his grandchildren and was proud to build his dream home outside of Urich and loved working on the “farm”.

Besides his parents, he was preceded in death by a son, Rodney Scott on April 10, 1971.

Bill is survived by his wife, Connie Scott of the home; two daughters, Dana Bennefeld and Denise Scott both of Raymore, Missouri; 5 grandchildren, Tyler Emerick, and wife Jessica both of the USAF, Alexandra Setzer and husband Zack, Austin Emerick, Emma Conner and Carter Fields; a great-granddaughter, Taylor Emerick; a brother, Robert "Bob" Scott, Phoenix, Arizona; other relatives and many friends.

Cremation. No services are scheduled at this time.

Funeral arrangements are under the direction of the Dickey Funeral Home, Harrisonville, Missouri.
To order memorial trees or send flowers to the family in memory of William "Bill" R. Scott, please visit our flower store.