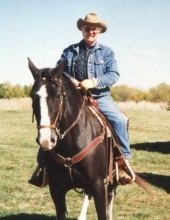 On July 8, 1949 Herb was united in marriage to Carol LaVonne Jenkins in Garden City, Missouri.

Herb was employed as an airplane mechanic for 13 years at Boeing in Wichita, Kansas and later for 27 years at the TWA Overhaul Base in Kansas City, Missouri until his retirement in 1991. He will be remembered for loving his family, being a homebody, enjoying the outdoors, horseback riding and being a member of the NRA. Herb had lived in Creighton and Drexel, Missouri and Wichita, Kansas before moving to Independence in 1964.

Besides his parents, Herb was preceded in death by his wife, Carol on June 10, 2013; his daughter, Sandra Guthrie; a grandson, Michael Shumate; five sisters and a brother.

Herb is survived by a daughter, Carol A. Shumate, Independence, Missouri; three grandchildren; four great-grandchildren; other relatives and a host of friends.

Graveside services were held Thursday, January 14, 2021 at the Grant Cemetery near Creighton, Missouri.

Family suggests memorial contributions may be made to the American Heart Association and may be left at the funeral home.

The family request that you wear a mask and practice social distancing while attending services.
To order memorial trees or send flowers to the family in memory of William "Herb" Parker, please visit our flower store.