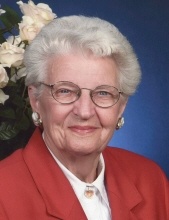 Wilma Faye Sisk, of Garden City, Missouri, was born May 12, 1924 in Daugherty, Missouri the daughter of James William and Gladys Marie (Garrett) Lotspeich. She went home to be with Jesus on Friday, July 3, 2020 at the Golden Years Care Center, Harrisonville, Missouri at the age of 96 years, 1 month and 21 days.

On March 25, 1943, Wilma was married to Richard Ray Sisk in Harrisonville, Missouri.

Wilma was a homemaker. Earlier she was a long distance telephone operator in Leadville, Colorado when Richard was in the service and later was a Nurse’s Aide at the Harrisonville Hospital in the 1970’s. She was a member of the Cass Regional Medical Center Auxiliary until 2 years ago and the Index Auxiliary Extension in Garden City. Wilma was a member of the First Baptist Church, Garden City where she was a Sunday School Teacher and worked with the youth. She was known as “Grandma Wilma” to the Kindergartners at the Early Childhood Center in Mrs. Sharon Poisal’s class and was the 2008 Volunteer of the Year for the Harrisonville School District. Wilma loved to be with her family and grandchildren.

Besides her parents, she was preceded in death by her husband, Richard Sisk on November 26, 1998; her daughter, Barbara Kellam on February 21, 2003; two brothers, Jim and Bob Lotspeich; four sisters, Naomi Hawn, Juanita Meyer, Ioma McFerrin and June Leslie.


Funeral services will be 2:00 p.m., Sunday, July 12, 2020 at the Heart Of Life Church, Garden City, Missouri with burial in the Garden City Cemetery.

Family suggests memorial contributions may be made to the Heart Of Life Church Memorial Fund.

Funeral arrangements are under the direction of the Dickey Funeral Home, Garden City, Missouri.
To order memorial trees or send flowers to the family in memory of Wilma Faye (Lotspeich) Sisk, please visit our flower store.